Cheeku with his Result
Image Courtesy- Sarthak Foundation
At an age, when the other children have milk bottles in their mouths, three-year-old Cheeku used to take a puff at 'Biri’ (Indian cigarette made by wrapping tobacco in Tendu leaves). One doesn’t know if the ‘biri’ tasted like milk to him. Or maybe he was just following what he saw around him. 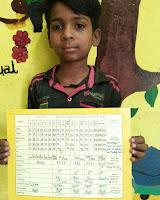 Cheeku, like millions of other Indian children, would have fallen victim to some dreaded disease but for a good Samaritan, who not only rescued him but also helped him excel in studies and instilled in him the hope.


Cheeku scored 99.5% in annual exams in his K.G class at a prestigious school in Lucknow. Subhendru Pandey of 'Sarthak foundation', a voluntary organization, says that the child is full of potentials and is certain to make a mark in the field he chooses to work.


He added “The foundation works in the field of education and gender equality especially in slums. Kajal a slum dweller used to wash utensils for 300 RS per month at the age of nine, as her father would beat her if she fails to earn money and now she having education in formal school by the help of NGO. In the educational session of 2017-18, we enrolled 71 children in English medium schools through the Right to Education Act. The foundation sets up open study centers in the heart of the slums and runs classes free of cost every day.”


The venture was initiated in Sonari village of district Sitapur at a pre-primary school in 2017 with just 7 children, Now the foundation has more than 800 children through 8 study centers in slums and aims to turn up this number to 2 thousand by 2020.


Where formal Govt schools are lacking quality education as ASER (Annual Status of Education Report for rural India) survey shows 36% of kids aged 14-18 don’t know India’s capital, 21% can’t name their state. In this scenario, one could imagine the educational strata of slums. Our slum dwellers’ future is vulnerable to get into the vicious circle of various evils like doping, gambling, and ragging as they are surrounded by alcoholics and gamblers.


“Every slum a has hero among them, like 12 years old Sanjana who once forced into child-marriage, resisted getting married and chose the path of education, now speaks fluent English and her family became supportive. She is an inspiration for many other girls like her” says Shubhendru.


Divya another member of the N.G.O said “For social change and Upliftment in the lifestyle of slum dwellers, every citizen along with the government should take responsibility. Closing the nose while crossing slums and slamming Govt for its inactivity, is not the solution. More and more people should take part to take slum children into the mainstream of the society”.