India - All set to witness "ring of fire"

India is all set to witness the 'deepest' annular solar eclipse of the century on June 21. The rare solar eclipse or the 'ring of fire' on Sunday would be clearly noticeable in all parts of India.

On June 21, 'Annular Solar Eclipse' will be observable in the southern Arabian Peninsula, Pakistan, Northern India and South Central China.

The rare annual eclipse will be seen over most of Asia, Africa, South and East Europe, northern Australia and parts of the Pacific and Indian Oceans. 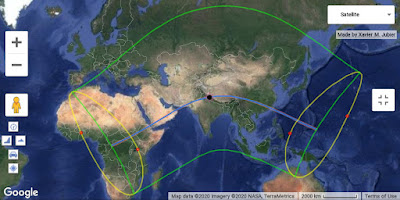 
Here is a statement by scientists who bust this common myth. Be Aware. Be Safe. And enjoy the Solar Eclipse on 21 June 2020!

What is solar eclipse?

A solar eclipse occurs when the Moon passes between Earth and the Sun, thereby totally or partly obscuring the Sun for a viewer on Earth.

During the June 21 solar eclipse, the Sun is expected to appear as a necklace of pearls for around 30 seconds, and thus it gets the "ring of fire" nickname.

The astronomical event will start at 9:15 am on June 21 as per Indian timings. While the full eclipse will start from 10:17 am with the maximum eclipse occurring at 12:10 pm. The solar eclipse will end at 3:04 pm in the country. The duration of the eclipse will be approximately six hours.

Eclipse begins: 9.15 am
Partial Eclipse begins: 10.10 am
Maximum or Greatest Phase of the Eclipse: 11.43 am
Percentage Obscuration of Sun by Moon: About 35 per cent
Partial Eclipse ends: 1.26 pm
Total duration of the eclipse: 3h 16m
Magnitude: 0.345
Visibility in India: Annular/ Partial
The astronomical event will be witnessed in Rajasthan, Haryana and Uttrakhand while the rest of the country will observe a partial solar eclipse.

Places namely Chamoli, Kurukshetra, Sirsa, Dehradun, will be really fortunate to see an annular solar eclipse, wherein the percentage of obscuration will be about 93 per cent to 99 per cent.

P.S. - Team of 4 people from SKY Foundation, India will going to witness this annular solar eclipse 2020 from Kurukshetra, Haryana, India amidst Pandamic Covid19.