4 Buddhist Tourist Places in Uttar Pradesh You Need to Know 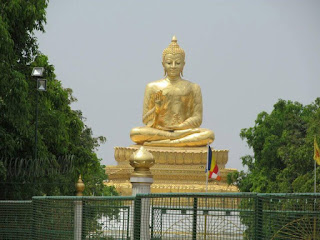 The government has undertaken promotional activities to promote the development of Buddhist tourism. "Dekho Apna Desh" campaign is to encourage Indians to travel their own country and pitch India as the land of Buddha.

Tourism minister Prahlad Patel emphasized the need to bring more Buddhist tourists to India, as the number of tourists has been decreased.

For improving connectivity from the Buddhist World to India’s Buddhist sites, Kushinagar airport will be upgraded as an international airport for allowing more pilgrims and tourists to visit India. It will also provide better opportunities for the local population.

The Ministry of Tourism has introduced signs in foreign languages including Chinese, at important Buddhist sites such as Shravasti, Sarnath, Kushinagar, and Sanchi, which are visited by a large number of Buddhist tourists.

Kushinagar is a Buddhist shrine where Gautama Buddha attained Mahaparinirvana. It is located on NH 28, about 50 km east of Gorakhpur. Due to history, stupas, and temples, it is also an international tourist destination where Buddhist pilgrims from all over the world come to visit.

These stupas and temples were discovered during excavations in 1861-1876 by Gen A Cunningham and A C L Carlyle. The excavations brought the city and its historical past into limelight. The historical structures have been divided into three groups – Nirvana temple, the central Stupa and surrounding monasteries, Mathakuar Kot, and Ramabhar Stupa.

The most prominent attraction is the Mahanirvana Stupa, where Lord Buddha attained Mahaparinirvana. The major attractions of the town are Wat Thai Temple, Burmese Temple, and Ramabhar Stupa.

Sarnath is a small village in Uttar Pradesh, India, located about 13 km northeast of Varanasi.

Shravasti is a beautiful city situated on the banks of River Rapti located 48 km from Bahraich. It is an important Buddhist pilgrimage destination in Uttar Pradesh.

Here, Buddha introduced his disciples to Buddhism's profound teachings and principles. It was said to be the capital of the ancient Koshal Empire.

Piparahwa is a village near Birdpur in Siddharthnagar district in the state of Uttar Pradesh, India. The fragrant and spicy rice variety, Kalanamak rice, is grown in this region. Piparahwa is famous for its archaeological excavations, suggesting that it may have been the burial site of some of the Buddha's ashes given to his own Shakya clan.

The major attractions to see are Piprahwa Stupa and Bharat Bhari Temple.

One can see at these places, several temples, stupas, and monasteries built in the Buddhist architectural style. More and more states in India are opening up for tourists with a lot of measures to be followed. Hotels will administer the RT-PCR test and tourists will be allowed to proceed from their hotels only after they test negative for the coronavirus.
Posted by www.devtales.co.in on July 21, 2020